The history of the skip; How it got its name and who invented it 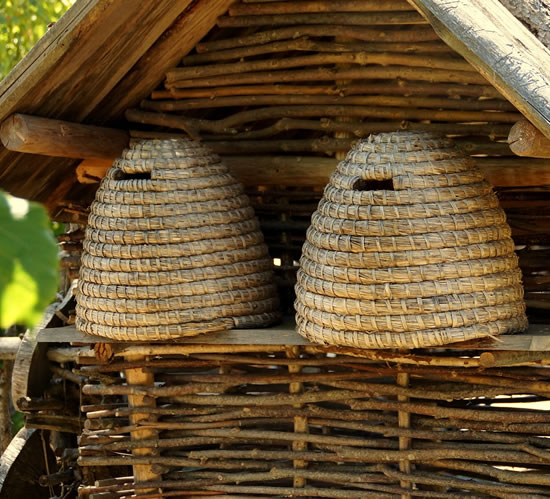 The history of the skip - How did it get its name?

The origins of the word 'skip' is something of an enigma; no one really seems certain about how the modern day skip got its name.

In countries like the US and Canada it's referred to as a dumpster, which seems logical given the nature of its use. However, in the UK we call them skips (or skip bins in Australia).

The most widely accepted explanation originates with the ancient art of beekeeping. Nowadays, most people tend to visualise the modern version of a beehive as a box-like structure made from overlapping wooden slats.

Before wooden framed hives came into widespread use, beekeepers in the UK and Europe tended to use either inverted straw or wicker baskets (or hollow logs in some cases) as homes for their honeybee colonies.

This traditional straw made hive was known as a 'skep' - Although its design made it portable and adaptable, it eventually gave way to more modern versions as techniques of beehive building evolved. Along with the demise of log beehives, the widespread use of the old style skep finally faded into history.

The meaning of the word 'skep' originally meant 'basket'.'Skep' itself comes from the Late Old English word 'sceppe', or from Old Norse 'skeppa', which also meant 'basket'.

Falling out of fashion

Along with traditional farming techniques on the European continent, the traditional skep was still often used as a home for bee colonies right up until World War II. In Britain however, the changing use of land in the 1700s led to the traditional skep being seen as part of an old and antiquated way of life.

By the 1800s it was no longer regarded as a suitable permanent home for bees and so it faded into obscurity.

The word skep is still used occasionally, but only when referencing it as a traditional artform (much like thatching). 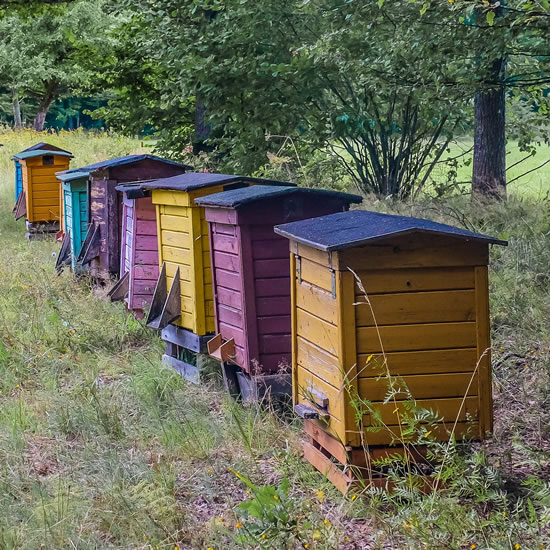 The Industrial Revolution - Cotton mill and coal mine skips

During the Industrial Revolution, the word skep was used by Lancashire cotton mill workers, who referred to the huge wheeled baskets they placed their woven cotton into as skeps.

The word was also commonplace in the coal mining industry - At the beginning of the industrial revolution, when technology was still in its rudimentary stages, coal was dug and measured in terms of skeps and a skep was also the name for the basket (with an arched handle) used for measuring the coal.

It's known that in Denmark a skep held 17.4 litres, so we can infer that an English skep would probably be about the same.

As mining processes evolved and became more industrialised, the advent of rail tracks brought about a faster method of moving the coal from the coalface to the surface.

With greater loads of coal to shift, the older style straw skeps were unsuitable for carrying large loads, so larger, wheeled versions made from wood and steel were built to run on the rail tracks.

Over the years, probably due to common mispronunciation, the word skep morphed into 'skip' - To this day, the term is still used to describe coal mine carts.

When was the Modern skip invented?

The modern skips commonly seen on the UK roads today originated in Germany in the 1960s. Because of their resemblance to coal mining skips, this is what they were usually called.

Further back in the 1920s, skip-like containers were used to remove waste by lorries in the Southport area. It's reported that this came about when an employee of Pagefield (a lorry manufacturer) called Edwin Walker, met with Southport's borough engineer.

The Southport engineer was obviously impressed - This led to the Pagefield system, which used 300 cubic Ft. horse-drawn containers on 20-inch diameter wheels. When the containers were full, they were winched on to the back of a Pagefield truck and hauled off to the dump.

In the early 1920s, a Letchworth company called S&D launched a more up-to-date adaptation of the Pagefield system.

It benefited from having hand controls, which made it easier for ex-horsemen to drive.

Back at the factory, the design of The Freighter was already being tweaked and in 1926, a system featuring sideways-mounted skips for the Marylebone area of London was rolled out. The main benefit of this was that several skips could be carried on the vehicle at the same time.

George Dempster was a US pioneer of the early skip truck. As a young man, he was an equipment operator working on the construction of the Panama Canal. Before this, he had several jobs in the locomotive industry. During the early part of the 1930s, he and his brothers Thomas and John set up a waste handling equipment company called Dempster Brothers Inc.in Knoxville, Tennessee.

In 1935 they invented, developed and patented a piece of equipment that could lift and transport portable skip-like containers at construction sites thus greatly reducing manpower requirements.

The invention resembled the way modern skips trucks work - A hydraulic hoist was mounted on the truck which could lift, transport and empty open topped skip containers. The invention was so successful, it unsurprisingly caught the attention of rival companies and local government planners. 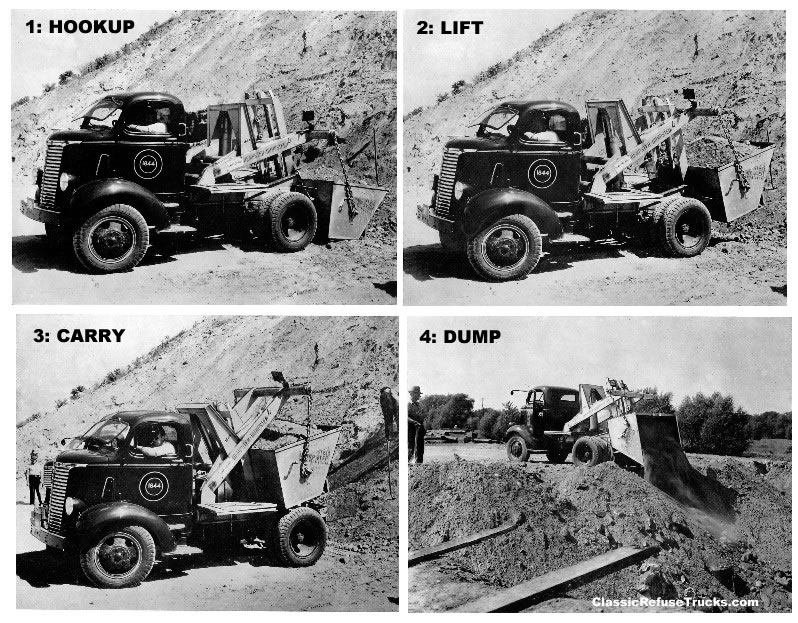 A smaller version (below) called the 150 B was also available.

At the time, inner city garbage collection was a real problem. Mass produced consumer products were on the rise and this meant that there was a sharp increase in the amount of disposal packaging that was being thrown away. Rubbish bins left outside in built up areas were both an eyesore and a health hazard.

Much of the city's waste was also dumped into refuse vaults which had to be emptied by hand but the advent of the Dempster Dumpster was about to change this. Dempster's skip truck invention was rolled out for the first time in the Dempster brothers' home town of Knoxville in 1937.

The Local Authority purchased one truck and 18 skip bins, each with a capacity of 2 cubic yards. The tops were covered to stop bad odours and problems with flies and rats. Unsurprisingly, they were a huge hit with local residents and Council officials alike. The cost benefits of this system were enormous; rather than having a group of men to deal with the garbage, one driver could now collect the full bins, empty them and place a fresh skip container in its place.

Around the same time as the invention of the Dempster Dumpster, a pair of brothers called Ernest and Wallace Brooks formed a company which produced heavy construction equipment for roads, quarries and mines. Also based in Knoxville, the brothers came up with a skip-like vehicle called The Load Lugger in 1938. Like the Dempster Dumpster, the vehicle was designed to lift and carry heavy skip containers and was also predominantly used in the construction industry. Bear in mind that this was 6 years before the company HIAB, (the Swedish manufacturer of loader cranes) was even born.

The Brooks brothers went one step further in 1940 by inventing a new, improved design. Their newly patented system used two hydraulic cylinders and lifting arms  mounted to the truck which could lift a skip bin directly on to the back of the vehicle. It also had stabilising 'feet' mounted to the rear which could descend to the ground, thus enabling the truck to lift heavier loads withouth the front rising into the air.

This superior, new invention closely resembles the modern day skip lorries we see on our roads today - The heavier load capacity meant the truck could carry bigger skip bins directly to the local dump and tip them immediately with just one driver.

The UK evolution of the skip in the 1960s

The 60s saw a boom in both the industrial and property sectors. With a boom in property development, an efficient and cost effective way was needed to shift the huge amounts of industrial waste on building sites.

The public also had higher disposable incomes than ever before. This led to a surge in demand for the humble skip as householders set about improving their homes - New kitchens and bathrooms were commonplace and fast, cheap methods of getting rid of unwanted waste were needed.

Typically, a skip was around 6 cubic yards at this time and cost about £5 per day to hire but had the benefit of allowing householders to get rid of all their waste in one speedy, efficient load.

Who invented the skip? - Trivia

If you're an Alan Partridge fan, then this somewhat obscure question also once arose on the fictional character's early morning radio show in episode 3 of "I’m Alan Partridge" titled "Watership Alan", when Alan unexpectedly threw the question "who invented the skip?" out to a caller. 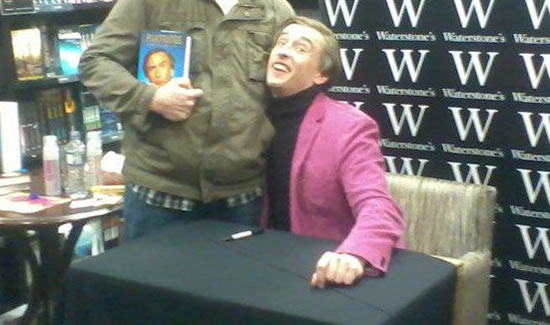 Predictably, the caller was unable to answer (photo of Steve Coogan at a book signing courtesy of Popcornduff).

History of the skip - Summary

A skep was originally the name for a straw beehive - The meaning of the word 'skep' meant 'basket' and comes from the Late Old English word 'sceppe', or from Old Norse 'skeppa', which also meant 'basket'.

The term skep was adopted in cotton mills and coal mines in relation to the large containers used in both industries and over the years, skep morphed into skip in the coal mines.

In the 1920s, skip-like lorries appeared on UK streets to collect household and business waste - Developments in the US in the 1930s and 1940s saw the invention of similar vehicles with the same type of hydraulic lifting arms we recognise today. The 1960s saw the widespread introduction of the business and domestic skip hire indrustry we're all familiar with.

So, who actually invented the skip?

It's difficult to assign one single historic name to its invention - The container vessel and the word "skip" evolved over many years but the modern day skip seen on the streets today can largely be attributed to the Dempster and/ or Brooks brothers in Knoxville, depending on your point of view!

Aside from blogging about the history of beehives and coalmines, we hire out 'skeps' throughout East and West Sussex. Get in touch for free advice or to book a beehive... sorry... I meant skip.

Special thanks to all the hard work and enormous collection of historic pictures and information at Classic Refuse Trucks.