Have you seen a critter like the one in the picture above? If so, university researchers want to hear from you.

The wall lizard (Latin name - Podarcis muralis) is a type of lizard that's already common in Europe and parts of North America.

For better or worse, the population has now begun to increase in the south of the UK as well. The wall lizard is easy to spot as it can grow up to about 20cm in length and, as the name suggests, can often be seen basking on walls and rocks during sunny, summer days in Sussex.

How to identify a wall lizard 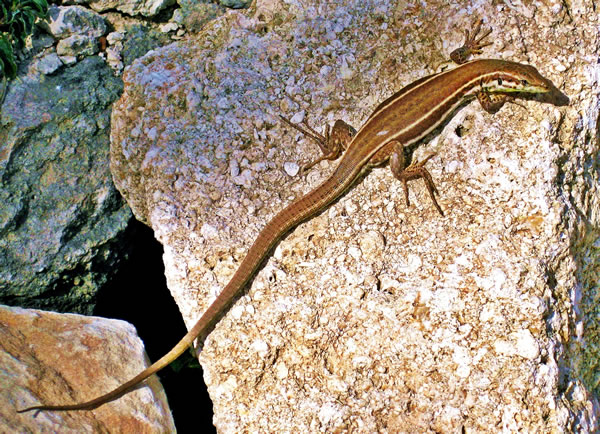 The common wall lizard is relatively thin and comes in a variety of colours and patterns although its scales are typically brownish or greyish in colour but may also be tinged with green. Some wall lizards can have a row of spots along their backs that form a line, while others may have a reticulated pattern with dark spots on the side and scattered white spots that can be blue around the shoulder area.

How you can help

Researchers at Leeds University are asking members of the Sussex community to help spot and identify this non-native resident so they can glean a better picture of how the species is spreading throughout the UK.

One of the reasons for the study is to try and establish how these new residents are affecting native lizard populations, as there's some evidence to suggest that it's having a negative impact on species that are already well established here in the south east of England.

Robert Williams, who is in charge of the study has been quoted as saying:

“They are very easy to spot basking on sunny days. Considerable survey effort is required to get around to all the known wall lizard sites and there is a need for updated population surveys, assessment of range expansion, and of course identification of new populations.

“This is where we need your help! You can help us assess just how widespread the lizards are in the UK and make a valuable contribution to this project by reporting your own wall lizard sightings, whether locally or further afield.”

If you've seen, or think you've seen one of these alien invaders, you can help the team by telling them where you've seen it on their interactive map.