As Eastbourne is one the areas where we provide our skip hire and rubbish clearance service, we thought we'd mention a recent bit of local news about the iconic Seven Sisters chalk cliffs. The well known local landmark has popped back on the radar again by managing to make it into a poll of the top 20 most stunning views in the UK.

As you'd imagine, the cliffs share their prestigious rating with some of Britain's (and indeed the world's) most well know landmarks such as Stonehenge, Loch Ness and Snowdonia.

The Seven Sisters made it to 18th in the poll, which was conducted by Samsung's recent PR campaign to promote it's new Galaxy phone. The poll surveyed around 2600 people who had to choose from a long list of breathtaking views.

Fairly predictably, the top 20 mostly consists of naturally occurring views rather than man-made structures although Big Ben and Oxford's spires also made the shortlist.

According to the study, there were 5 main factors that influenced voters' decision making. At 42%, rolling countryside vistas were the main factor followed by rugged coastlines at 21%. Quaint country villages rounded out the top 3 with 20%, whilst historical landmarks and spires came 4th and 5th respectively.

About the Seven Sisters

The Seven Sisters gets its (or their) name from being a series of chalk cliffs by the English Channel and form part of the South Downs in East Sussex where the Downs meet the sea. They're within the Seven Sisters Country Park named after them.

They're remnants of dry valleys in the chalky South Downs and are gradually being eroded by the sea. It's estimated that the cliffs are gradually being eaten way at a rate of 30 to 40cm per year. The erosion doesn't happen as a gentle nibbling, it's instead caused by more substantial chunks that plummet into the sea after either being buffeted by the sea or after periods of heavy or persistent rain. This tends to happen around 2 or 3 times a year and the fallen chalk helps protect the cliffs from further erosion for about 9 years afterwards until the chalk is washed away and the sea begins to erode the base of the cliff again.

Each peak has its own name - Haven Brow, Short Brow, Rough Brow, Brass Point, Flat Hill, Bailey's Hill and Went Hill and the image below shows the position of each point.

It's claimed that the ongoing erosion is creating an 8th hill but it remains to be seen whether the name will eventually be changed to the Eight Sisters as a result.

Photos of The Seven Sisters often also show the well-known Belle Tout Lighthouse and the infamous Beachy Head. The area is also of interest to archaeologists due to evidence of a Bronze Age settlement at Belle Tout. 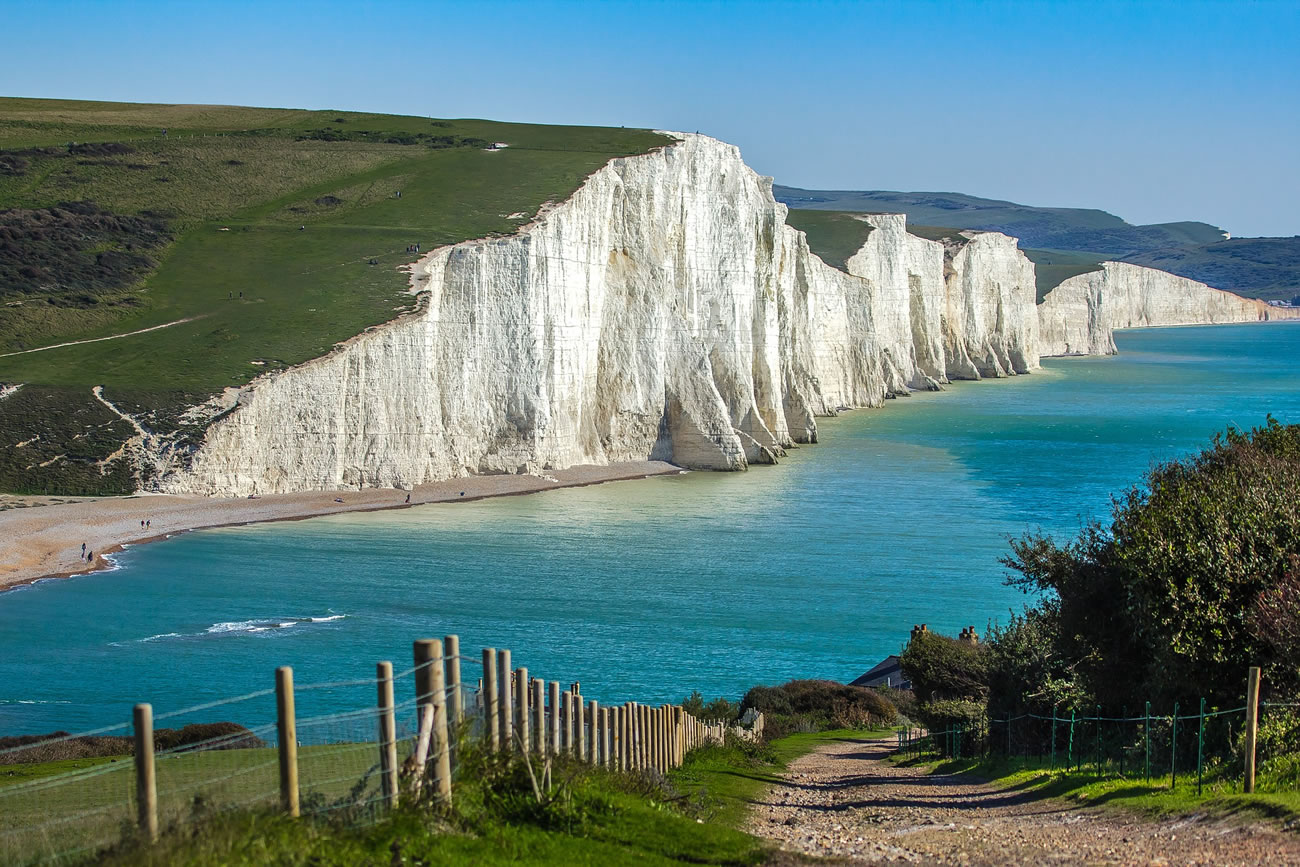 The Seven Sisters cliffs are sometimes used as a stand-in for the White Cliffs of Dover as this area of the South Downs is free from man-made developments. This provides a better backdrop for filmmakers as the cliffs are left to erode naturally, which helps them maintain their brilliant white appearance. Conversely, the White Cliffs of Dover are protected by the heavily developed Dover Port, which stops the erosion process and allows plants to grow on the cliff face. Because of this, the Dover cliffs aren't really white anymore and are instead a less attractive green colour.