The history and origin of the Rag and Bone Man

Many of today's younger generation have never heard the term 'rag-and-bone man' as these enigmatic figures have largely all but disappeared from our modern streets.

It was extremely common back in the 1970s to hear a rag and bone man calling to householders as he travelled slowly down our roads, shouting 'old lumber', 'rag-and-bone' or something similar. As some will also no doubt remember, the profession even spawned a hit TV show in the 1970s in the guise of Steptoe and Son.

If you're new to the term, a rag and bone man (sometimes referred to as a 'totter') was a person who either travelled by horse (or pony) and cart or in a van at a snail's pace down every neighbourhood street, looking to collect a wide range of materials to sell for a profit.

History of the rag and bone man

Whilst scavenging for anything of value is by no means a new idea (we've been doing it since the dawn of time), the term - or variations of it, seems to have been commonly used in the early to mid-1800s.

Rag and bone men would travel through city streets on foot, usually carrying a large bag over their shoulder. They rarely had any form of transport and were generally very poor people trying to eke out a living from collecting anything that they thought might have a resale value such as old rags, cloth, bones and metal.

They were typically referred to by names such as bone grubbers, bone pickers or rag gatherers.

Why would anyone want old bones and rags?

In today's world, it may astonish some to think that rags and bones had any value at all. We throw so many things away that back in the 1800s would fetch a decent secondhand price. For example, if the rag gatherer could collect (and dry) decent white rag in good condition, he could sell it to local cloth traders for around 2 to 3 pence per pound, with coloured cloth fetching about 2 pence per pound. Old bones would also fetch a similar price and were sold on to merchants to make soap. The bones could also be used to make ornate handles for cutlery, toys or ornaments. If treated, the bones also had scientific value as they were commonly used in the field of chemistry.

Henry Mayhew was a London journalist who wrote a series of newspaper articles between 1849 and 1851. The collection, called ' London Labour and the London Poor' was an expose of the underbelly of London's impoverished masses, including those working, begging or stealing.

He estimates that in London, between 800 and 1,000 "bone-grubbers and rag-gatherers" lived in lodging houses, garrets and "ill-furnished rooms in the lowest neighbourhoods."

He says: "The bone-picker and rag-gatherer may be known at once by the greasy bag which he carries on his back. Usually, he has a stick in his hand, and this is armed with a spike or hook, for the purpose of more easily turning over the heaps of ashes or dirt that are thrown out of the houses, and discovering whether they contain anything that is saleable at the rag-and-bottle or marine-store shop". 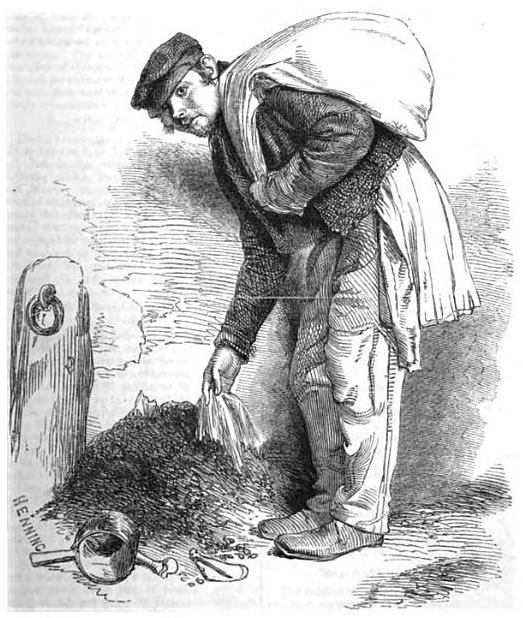 The rag and bone men would work long hours for a relatively small reward, sometimes as much as 10 hours every day, and would often turn to this way of earning a living after falling on hard times. They were sometimes frowned upon by members of the local community and would frequently start work during the night or at the crack of dawn to avoid crowded streets and to be first on the scene of the prior day's discarded rubbish.

An 1872 report of rag-and-bone men in London's Westminster area caused a stir after it was found that they'd emptied the entire contents of two dust trucks in order to search for anything of value, thereby blocking the path for pedestrians.

Rag and Bone Men in Paris

In France, the government had brought in regulations to control Paris' rag and bone man population. They were only allowed to work at night and were also required to return anything valuable they found to its original owner - or if they didn't know who that was, to hand the item into the authorities. They did still have some public support, with a french newspaper criticizing a government official called Eugène Poubelle after he made the use of dustbins compulsory in Paris, thus almost destroying the rag and bone men's livelihood.

The soaring value of metal

Despite the use of the words rag and bone, these industrious individuals were always on the lookout for metals of any kind. It produced a higher value per pound than most other materials they collected, and it didn't rot or smell. An 1836 edition of Chambers's Edinburgh Journal describes how "street-grubbers" would scrape out the dust and dirt between paving stones in the road looking for discarded or lost horseshoe nails. They were also especially keen to find brass, copper and pewter as this could be worth up to 5 pence per pound which was considerably better than the couple of pence they'd get from rags, cloth and bone.

Over the last 10 years or so, the price of scrap metal has soared. This has led to the (almost extinct) rag and bone man re-appearing back on our streets. In many urban and suburban areas, it's not uncommon to see things like old metal bed frames or household appliance being left outside in the street for them to collect on their rounds. Of course, it's pretty rare to see them using a horse and cart these days as vans and tipper trucks have taken precedent.

Since scrap metal is now a valuable commodity, there are many companies that focus solely on the scrap metal market and in particular, the scrap car recycling market. Advances in technology mean that more and more of the car's components can be recycled, including the precious metals in the catalytic converter. This has effectively seen the end of the rag and bone man in this niche of the scrap metal industry since scrap car companies will generally be able to pay far higher prices and have the specialist equipment to be able to fully recycle the vehicle and all its valuable components.

However, in recent times, changes in legislation have meant that if you have scrap metal to dispose of, you can no longer take it to your nearest metal dealer and get paid in cash, you must get back by cheque or bank transfer instead to create a paper trail of the transaction. Fortunately for your local rag and bone man, since you're giving

Not to be confused with the old-school type of rag and bone man described above, Rag'n'Bone Man (real name Rory Graham) is also the name of a well know singer-songwriter from nearby Uckfield, East Sussex. Rory has shot to stardom recently with his widely acclaimed debut album titled "Human". His first hit single, also called "Human" was released in July 2016. It enjoyed huge success by getting to number one in Austria, Germany, Belgium and Switzerland. It also went 'Gold' in Germany, Italy, Sweden, Switzerland, Austria, Belgium and the Netherlands.

Rag'n'Bone Man has also won a highly acclaimed award at the Brit Awards this year, winning the British Breakthrough Act and Choice Award. To give you an idea of his popularity, the single on his official YouTube channel has had an incredible 179 million views in just seven months.

It would be a fair assessment to say that as a skip hire company, we're certainly in the same ball-park as the humble rag and bone man of yesteryear. Huge leaps in technology and infrastructure now allow us to sort and recycle the vast majority of waste we collect; currently over 90% in fact. We also have a legal (and moral) obligation to be responsible when dealing with the waste we receive. However, there are still some obvious parallels between the way we operate and the bone grubbers of the 1800s - we're always happy to take your non-hazardous waste, although unlike the rag and bone man, we can't do it for free!

When we're not busy researching the history of our industry, we're out and about 6 days a week delivering and collecting skips in Eastbourne, Hastings, Brighton and most parts of East and West Sussex.