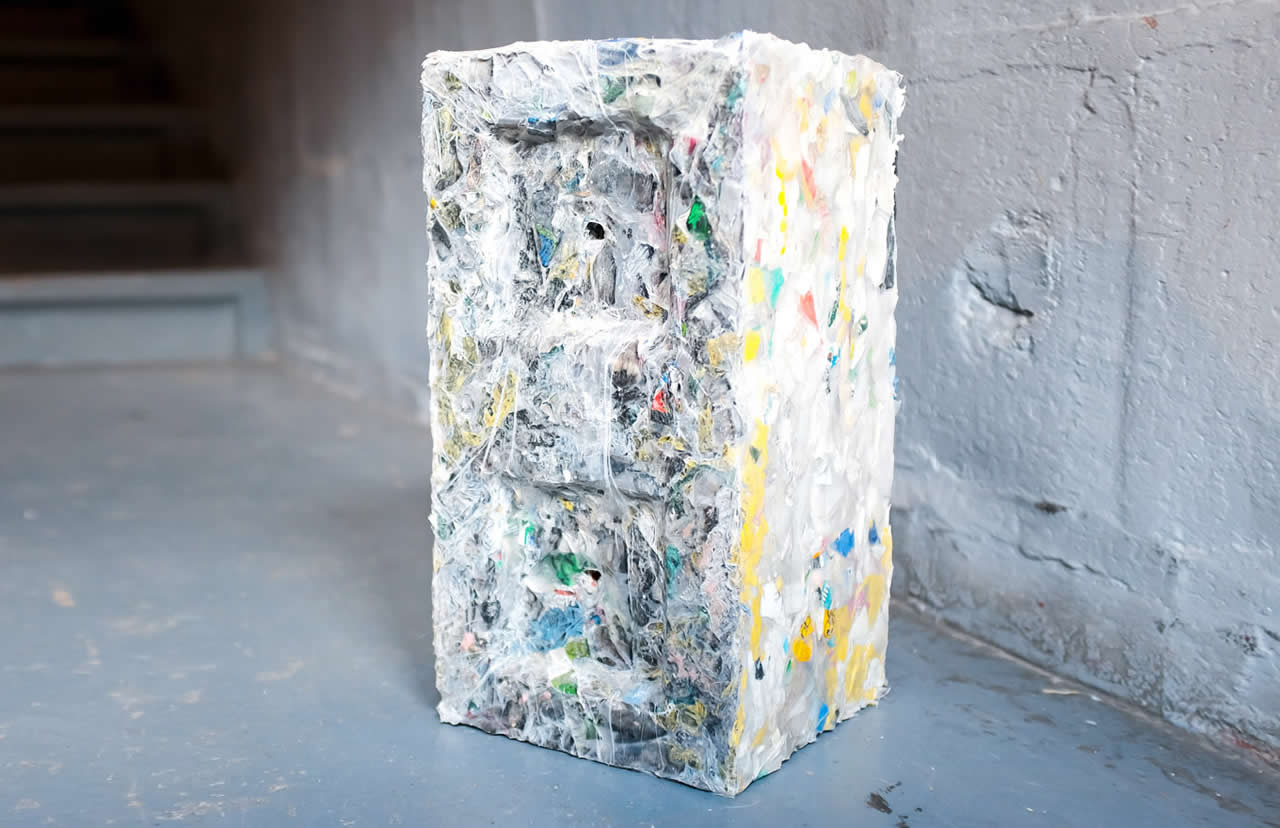 We often write articles about plastic waste - The reason for this is that plastic is the biggest culprit when it comes to waste production; we throw away more plastic than any other material. Not only this, it also accounts for around 90% of all the waste that bobs around in our seas and oceans. The 3rd worrying factor is that it can take hundreds of years to biodegrade, making it a serious problem for future generations to deal with as well.

But it's not all doom and gloom. There is a constant stream of new and innovative ideas to tackle the mounting problem of plastic waste. From plastic roads to plastic training shoes, people are finding new ways to deal with the issues at hand.

For example, researchers from the National Council of Scientific and Technological Research (CONICET) in Argentina have come up with a novel way to turn used plastic drinking bottles into eco-friendly building bricks. The PET (polyethylene terephthalate) material the bottles (and bricks) are made from is as strong as a conventional house brick made from sand and cement.

They also have several significant advantages over conventional bricks - they're thinner and lighter, have superb heat insulating properties (5 times more than standard bricks) and are just as strong as their stony counterparts. They're also great at insulating against noise and it only takes 20 bottles on average to make one brick.

Each brick helps rid the world of discarded plastic and is cheaper and more fuel efficient to manufacture than conventional bricks. It's also less energy intensive than recycling the plastic into other forms.

Peter Lewis, a New Zealand based inventor, has been following a similar process with a company called ByFusion, where he works as an engineer. The company's main focus is to convert plastic rubbish into a range of sustainable building materials.

Peter is the man behind RePlast (also called ByBlocks), a brick-like product that can be made in a variety of shapes, sizes and densities.

The process involves a modular platform that is portable and designed to run on gas or electric. His machine (The Blocker) doesn’t even need the plastic to be sorted or washed; it just compresses the plastic scrap directly into bricks. As you can see from the image below, The "Blocker" can be easily transported in a standard 40ft (12M) shipping container and once installed, plastic trash is emptied into the shredder and then moves on to the water boiler and compactor section. Using super-heated water, the plastic is then simply compressed and shaped into durable bricks. 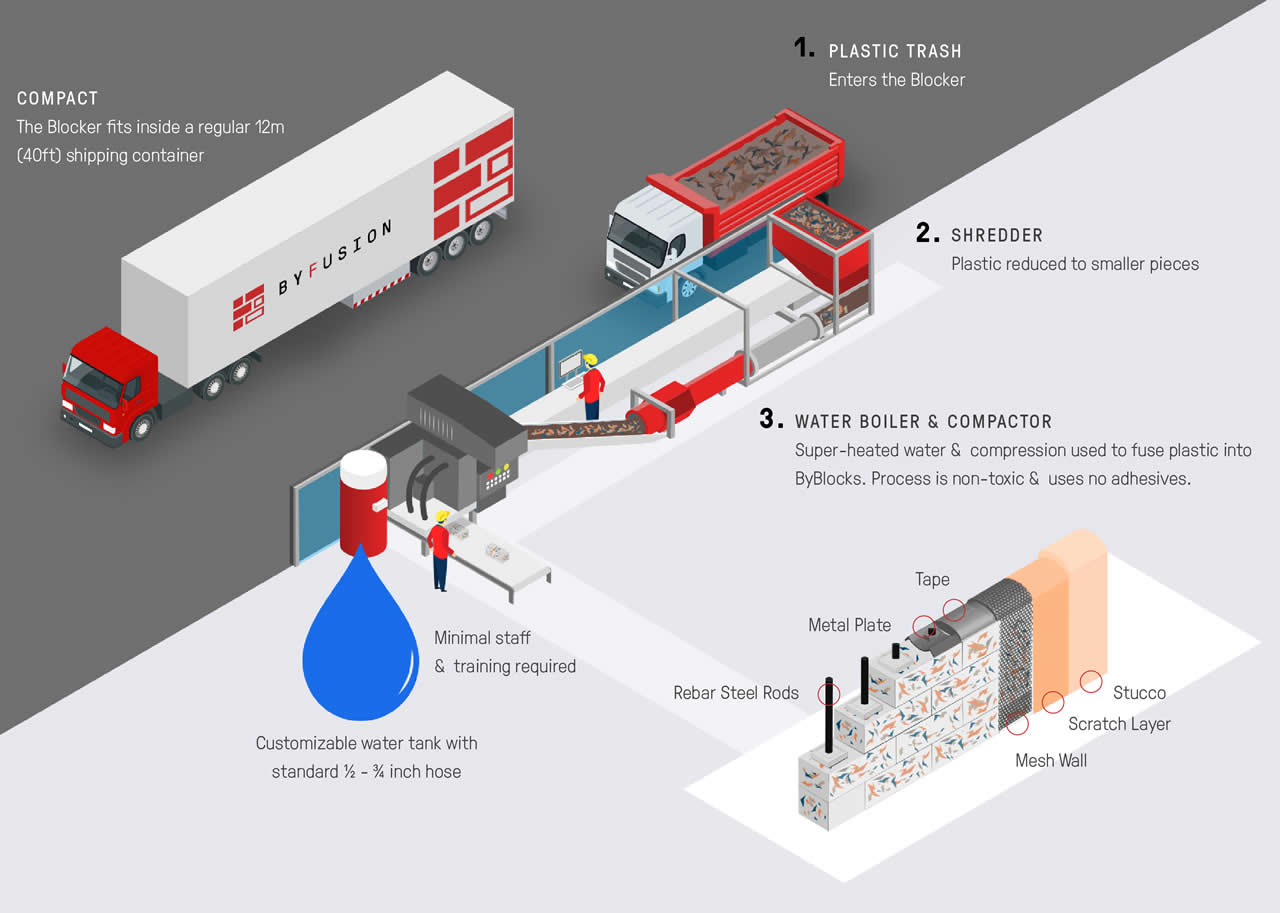 The manufacturing process (Image used with permission from ByFusion)

The bricks require no glues or adhesives for use, and the non-toxic production process produces 95% lower Greenhouse Gas Emissions (GhG) compared to concrete blocks and have very high thermal and acoustic insulation.

Peter was initially working on a process to create construction blocks out of straw bales. He was already aware of the fabulous thermal properties of straw but was distracted by constant images of how plastic was destroying New Zealand's pristine landscape and diverse wildlife. Whilst pondering on ways to use the mountain of plastic rubbish in a more constructive way, he had the idea of using plastic instead of straw. He realised that plastic had similar heat insulating properties so started forming a prototype technology to use plastic instead.

After a shaky start and not much progress in New Zealand, the company decided to focus on the much larger US market instead. With much attention focused on the amount of waste the US produces, the country was ripe for ByFusion's new product.

Gregor Gomory, the company's CEO was acutely aware of the then plummeting oil prices and the problem that waste management companies had trying to sell recycled plastic - It was actually cheaper for companies to make new plastic rather than buy recycled plastic.

He says: "We purchased the IP and developed a platform to bring the concept to the US and to do things at a much larger scale; our timing was much better".

One of the drawbacks of these type of bricks is that they can't be used like standard bricks because the plastic compresses under heavy structural loads. However, their saving grace is that because of their awesome sound and thermal insulating properties, they make superb wall fillers.

According to the ByFusion website, ByBlocks are perfect for non-load-bearing walls, retaining walls and walls that require soundproofing. Also, because of the flexible nature of plastic, they're ideally suited to earthquake zones too or you can simply just use them for making durable, long-lasting fences.

Gregor says: "RePlast blocks have incredible thermal characteristics in terms of sound and heat transfer. We envisage using them with normal building frames as fill. Our initial testing shows that they blow traditional cement blocks out of the water".

The company's RePlast blocks (ByBlocks) can also be used to make roads and are great for small community projects too. He adds: "In theory, we’re looking at an absolute definition of a circular economy, whereby plastic waste washing up in local communities gets processed and used in local community centres or on roadways".

We're a professional skip hire company covering most of Sussex including Brighton, Hastings and Crawley.