Why we're the No.1 Choice in Polegate 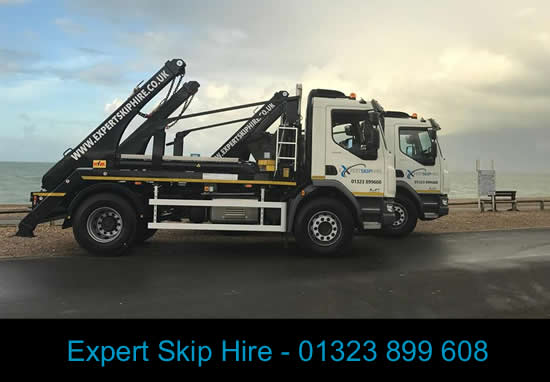 If you live in the Polgate area and need a skip delivered fast, then we're definitely the company to call.

We're based in Seaford and as you'll probably know, Polegate is a mere stone's throw away at just under 10 miles distance.

This means that we can usually get a skip to you in lightning fast time.

There are plenty of skip hire companies to choose from but many are agencies that don't actually have any skips, vehicles or waste recycling facilities of their own.

Once their commission is added on top, you'll usually be paying over the odds for a service that is far cheaper if booked directly through us.

We're open from 7.30am six days a week and our friendly team are on hand to take your booking or to just give you some free, no obligation advice if you prefer.

We're proud of our commitment to recycle as much of the waste we receive as possible.

Many people think that once their skip has gone, the contents are sent straight to landfill; but this isn't the case.

Once your loaded skip arrives back at our Waste Recycling Centre, the contents are hand sorted in order to seperate the various waste into different type of materials (e.g. paper, wood plastics etc.).

Using this simple but effective method enables us to recycle over 90% of all the waste we collect. Many items that can't be recycled are incinerated (for fuel to drive power station turbines). The remaining, sorted waste is then sold and recycled.

It may seem time consuming to sort the waste by hand but the cost to the environment is far greater if this isn't done.

So now you know a bit more about the process of hiring one of our skips or roll on/off (RoRo) containers in and around Polegate, give us a call to find out how quickly we can get one of our friendly drivers to deliver one to your location.

Don't forget, we're only around 10 miles from Polegate so it's possible we can get one to you in under an hour at certain times of the day. We're also one of the cheapest companies around, with prices starting from as little as £140+VAT. 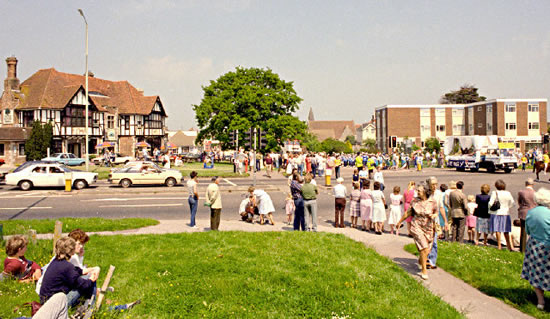 If you've no need for a skip but would like to know a bit more about the area you live in, here are a few in interesting facts about Polegate.

Until the coming of the railways in the 1840s, Polegate was a small settlement within the parish of Hailsham. The Roman road from Pevensey to Lewes passed through Polegate, and the turnpike between London and Eastbourne was developed in the 18th century; but it was the opening of the railway between Lewes and Hastings, with later branches to Eastbourne and Hailsham, that meant growth for Polegate. It became a significant junction, with a freight terminal serving both the nearby market town of Hailsham and the local brick making industry. The town grew partly to accommodate the railway employees.

In the 12th century, the Premonstratensian order of monks occupied Otham Abbey in the parish, before relocating around 1208 to Bayham Abbey, near Lamberhurst. Two buildings remain of that time, Otteham Court and its Chapel.

In 1851 a church school was established in Polegate. St John's Church was opened on 10 November 1876. The site of the church and the parsonage was donated by Mr Fuller-Meyrick, owner of the Brightling Park Estate. The separate parish of St John's was formed on 26 October 1937, with the first vicar being Rev. John Catterall Salisbury (he had been curate since 1933). In 2013 the Parsonage building in Church Road was sold by the Diocese.

In the 21st century, with the closure of the line to Hailsham and the once direct route to Hastings, its importance as a railway hub has gone. It remains a road junction, with the erstwhile turnpike now being the A22 road; the junction with the A27 lies within the town boundary.

There are four streets in today's Polegate named for the Levett family (Levett Close, Levett Road, Levett Avenue and Levett Way). The Anglo-Norman family were early Sussex landowners, and held manors and lands across the county, including Firle, Bodiam, Hollington and elsewhere. The family's lands were carried into the families of Gildredge (and then to the Davies-Gilbert family of Eastbourne), the Eversfields of St. Leonards-on-Sea, the Ashburnhams, the Chaloners and others. 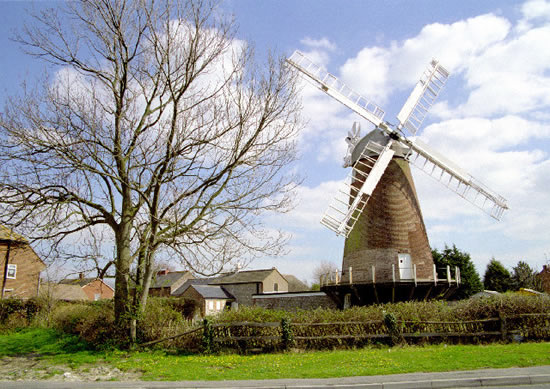 Ovenden's Mill was built in 1817 and was working by wind until 1943. The mill was worked by auxiliary engine, latterly an electric motor, until 1965. By the time the mill stopped working, it was becoming derelict. Eastbourne and District Preservation Trust bought the mill and grounds, and a restoration carried out by E Hole and Sons, the Burgess Hill millwrights.

One of the new stocks broke in July 1974, bringing the sail with it. This particular stock was only seven years old. Thompson's, the Alford millwrights fitted a replacement stock and two new sails in May 1976. Further restoration work was undertaken in 2004, including the fitting of a cowl to the adjoining malthouse. Two new sails were fitted in 2009.