Amusement arcades and the seaside are synonymous and it's also not uncommon to see rows of gaming and video amusement machines when you take a stroll along most piers around the country. This hasn't been the case over recent years for Hastings Pier although this now looks set to change. Whether you love them or loathe them, proposals to open an amusement arcade on Hastings Pier were given the green light earlier this month (May 1st 2019) by Hastings Borough Council’s planning committee, who approved an application to allow an amusement arcade in the visitors' centre building. From what we can gather, this won't include any adult gambling machines within the building so we assume that all the amusements will be of a family-friendly nature.

Following the pier's recent fall into administration, it was subsequently sold for a reported £50,000 to business tycoon Sheikh Abid Gulzar, who also owns Eastbourne Pier. According to an article in The Guardian, local campaigners who fought to save the pier were "devastated and furious" that it was sold for a fraction of the total cost of renovations, estimated to be around £14million at the time. It's reported that following news of the sale, members of the local community grouped together on the pier later on Friday night to offer Abid Gulzar £65,000, but he turned down the offer.

Things were looking rosy for Hastings Pier following its rise from the ashes (quite literally) after it was destroyed by fire back in 2010. The pier had been closed to the public 2 years prior to this so its future was already looking bleak. However, after a compulsory purchase order implemented by Hastings Borough Council, the Hastings Pier Charity (HPC) bought the Pier for £1 in August 2013. A plan for redevelopment was submitted to the Heritage Lottery Fund, who awarded a project grant of around £12m towards the estimated £14.2m that was required to restore the pier to the former glory of its Victorian heyday. Money was also raised by selling shares in Hastings Pier for £1 per share.

History of the Pier

Hastings Pier was originally designed by a well known Victorian engineer Eugenius Birch. The Pier was opened during Queen Victoria's reign (1837 - 1901) on a damp and blustery August Bank Holiday Monday in 1872 by the Earl of Granville, Lord Warden of the Cinque Ports.

The elaborate opening ceremony was followed by a celebratory banquet. During the Earl’s after-dinner speech he is quoted as saying:

“This pier, if I may so use the phrase, appears to me to be a peerless pier – pier without a peer – except, perhaps, the unfortunate peer who is now addressing you”.

For many years, this iconic Victorian Pier was hugely popular with both the local community and visitors from far and wide.

The construction of the pier started with the first pile being driven into the seabed at 3 am on 18th December 1869.

During the 1980s the Pier fell into a state of disrepair. At this time, Piers were becoming unfashionable and people were choosing to holiday abroad more so than ever before. To try and counter the declining crowds, the previous owners tried to revamp the Pier by building more on the superstructure. Unfortunately, they paid little attention to the more costly (and largely unseen) substructure of the Pier. 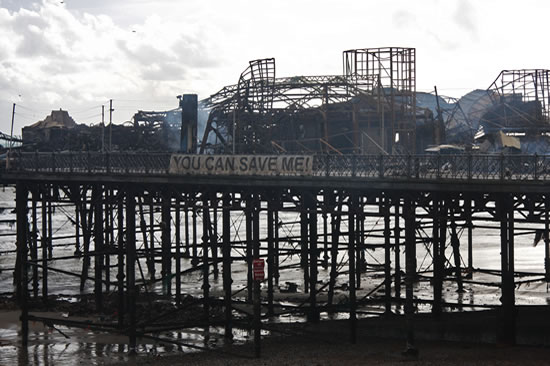 By Brian Snelson - originally posted to Flickr as 'YOU CAN SAVE ME', CC BY 2.0, Link

As a result, The Pier was finally closed in 2008. There were various campaigns by the local community to save and restore the much loved Grade II Listed Pier, although restoration plans were put on hold indefinitely when a huge and devastating fire all but destroyed it one October night in 2010.

We're a professional waste management company providing low-cost skip hire and rubbish clearance to Hastings and most parts of Sussex.